“He has achieved success who has lived well, laughed often, and loved much, who has enjoyed the trust of pure women, the respect of intelligent men, and the love of little children, who has filled his niche and accomplished his task, who has left the world better than he found it, whether by an improved poppy, a perfect poem, or a rescued soul, who has never lacked appreciation of Earth’s beauty or failed to express it, who has always looked for the best in others and given them the best he had, whose life was an inspiration, whose memory a benediction.’ – Bessie Anderson Stanley

There were always quotes like that tucked away in Fred’s wallet, next to his neatly folded bills, or in the pages of his daily planner book. Perhaps he liked having words of wisdom close to him, as if he wanted—or needed—to be constantly reminded of what was important in life. The outside world may have thought his qualities of wisdom and strength came naturally to him, but those close to him knew that he was constantly striving to be the best that he could be. He was as human as the rest of us.”

Welcome to the second Note on Mister Rogers’ wisdom.

Did you know that Fred Rogers was an ordained Presbyterian minister who was given the unique charge of working with children and families through television? Yep.

Since watching the documentary Won’t You Be My Neighbor?, I’ve fallen in love with the man and his “relentless commitment to all that is best in people.”

I actually read both this book and the one we covered in our last Note (You Are Special) on the same weekend. They’re both quick-reading collections of some of Fred’s best wisdom gems gathered from various sources and organized by different themes.

And… Both books left a very powerful impression on my consciousness—making me a better, more loving father and husband. In fact, Fred Rogers is my new go-to hero for the warmth and patience and presence with which I want to show up in those roles in my life.

As I was reading his books (and elevating my consciousness via his), I was reminded of some Joseph Campbell wisdom. A couple nuggets actually.

First, his quip from Pathways to Bliss: “For myself, well, Alan Watts once asked me what spiritual practice I followed. I told him, ‘I underline books.’ It’s all in how you approach it.”

And, this little exchange with Bill Moyers from The Power of Myth.

Moyers asked Campbell: “How do we know these things [how to experience bliss]?”

To which Campbell replies: “I’ll tell you a way, a very nice way. Sit in a room and read—and read and read. And read the right books by the right people. Your mind is brought onto that level, and you have a nice, mild, slow-burning rapture all the time. This realization of life can be a constant realization in your living.” <- Emphasis mine. Yep. That’s exactly the sensation I had.

If you’d like to soak your mind on Mister Rogers’ wonderfully wise level, I think you’ll love the book as much as I did. (Get a copy here.) (And, you can learn more about the great work that the Fred Rogers Production staff continues to do in the world here.)

As always, this book is packed with Big Ideas and I’m excited to share a handful we can apply to our lives TODAY so let’s jump straight in! 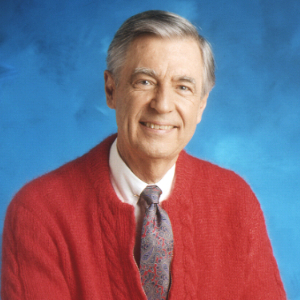