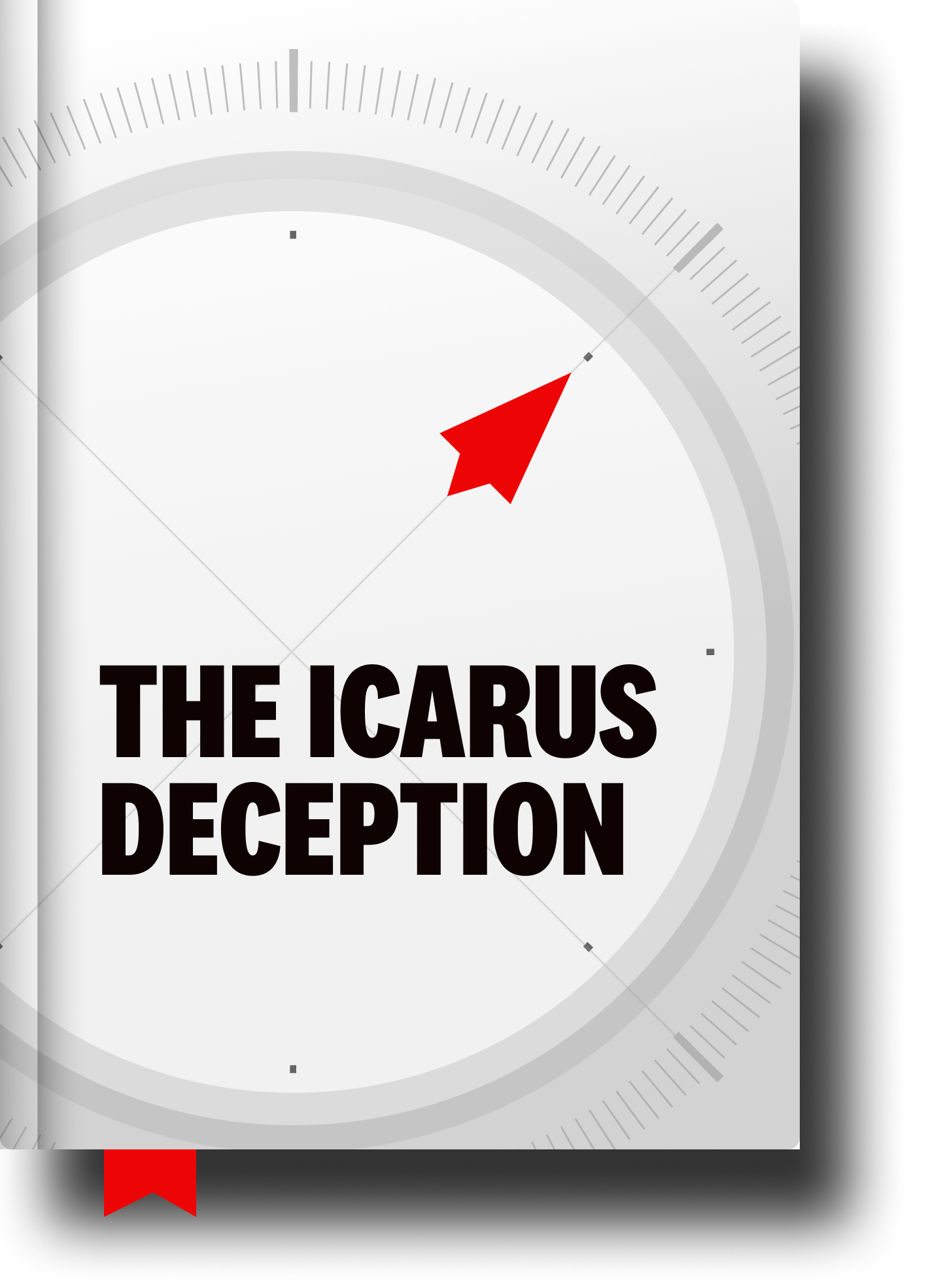 In our last couple +1s, we had some fun with Seth Godin and my dictionary as we learned how to be godlike.

Today we’re going to talk about what he calls “The Icarus Deception.”

Most of us know the basic idea of the myth of Icarus. Here’s the quick recap (and then the “deception”):

Once upon a time, a master craftsman named Daedalus upset King Minos. He was banished to prison. Then he came up with a brilliant way to escape. He made some wings for himself and his son so they could fly.

The wings are attached to their bodies via some wax. So, Daedalus told his son Icarus not to fly too close to the sun or the wax would melt. Of course, Icarus got a little excited about his new-found ability to fly and went straight for the sun and… Eek… Wings came off. He fell. Splash!

The water he fell into is now called the Icarian Sea.

Fun personal biographical fact then on to the moral of the story and the important missing component: At sunrise almost twenty years ago, I was at the Port of Piraeus in Athens waiting for a boat to take me to Samos and then on to Ephesus, Turkey via the Icarian Sea. I happened to be reading Plato’s dialogues, specifically the Apology in which he describes Socrates’ trial and execution and mentioned the Port which was kinda fun. 🤓

And… We have a painting of the ancient library of Ephesus in our living room. So, the Icarian Sea has a special place in my heart. Even more so after reading Seth’s book.

Now, to the point of Today’s +1 and the theme of Seth’s book.

As Seth says: “The lesson of this myth: Don’t disobey the king. Don’t disobey your dad. Don’t imagine that you’re better than you are, and most of all, don’t ever believe that you have the ability to do what a god might do.

The part of the myth you weren’t told: In addition to telling Icarus not to fly too high, Daedalus instructed his son not to fly too low, too close to the sea, because the water would ruin the lift in his wings.

Society has altered the myth, encouraging us to forget the part about the sea, and create a culture where we constantly remind one another about the dangers of standing up, standing out, and making a ruckus. Industrialists have made hubris a cardinal sin but conveniently ignored a far more common failing: settling for too little.”

So… The Icarus Deception? In short: It’s the belief that the greatest risk is trying to fly too HIGH when, in fact, in our modern world, it’s the opposite. Most of us fly way too LOW.

Back to Seth who tells us: “The path that is available to each of us is neither reckless stupidity or mindless compliance. No, the path that’s available to us is to be human, to do art, and to fly far higher than we’ve been taught is possible. We’ve built a world where it’s possible to fly higher than ever, and the tragedy is that we’ve been seduced into believing that we ought to fly ever lower instead.”

So… To be clear, we’re not saying we should fly straight at the sun. We’re not going for “reckless stupidity.” That, of course, would be akin to Aristotle’s vice of excess. We just want to make sure we pay attention to the OTHER half of Daedalus’s advice (“Don’t fly too low, son!”) lest we fall on the *other* side of Aristotle’s spectrum and fly too low over the waters of the vice of deficiency.

The target? Let’s have fun seeing how high we can fly without burning ourselves and/or our wings up. :)

Oh! Friendly flier’s warning: With a culture so afraid of any signs of hubris (which Seth tells us is an ESSENTIAL component of doing what we’re here to do!), beware, that your high-flying will take some courage. As Nietzsche says: “The higher you ascend, the smaller you appear to the eye of envy. But most of all they hate those who fly.”