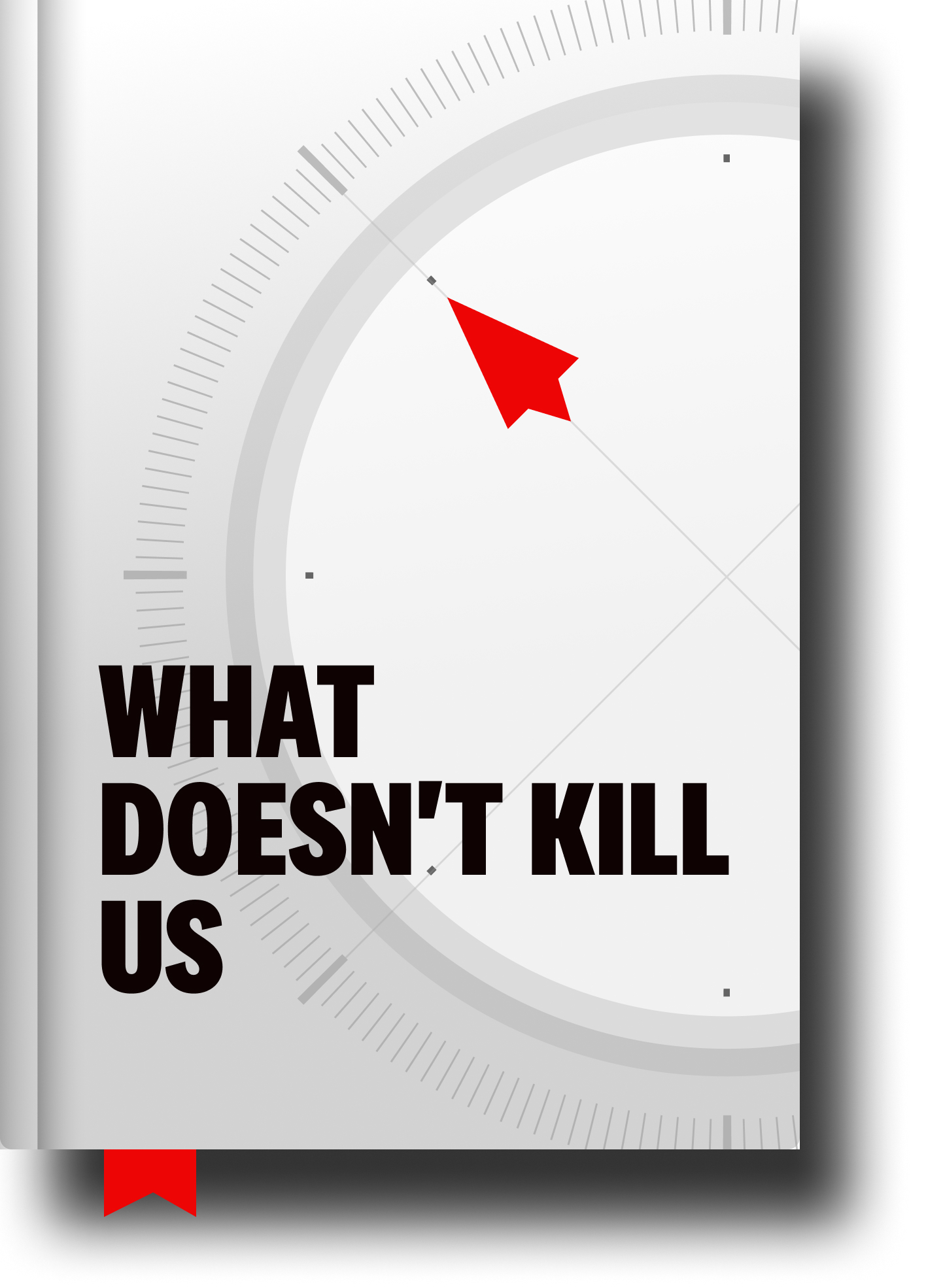 In our last couple +1s, we talked about the fact that there are no eudaimonic treadmills and that a eudaimonic orientation is correlated with lower levels of depression.

Eudaimonism for the win!

We pulled that wisdom out of Stephen Joseph’s great book What Doesn’t Kill Us.

I got that book after I saw his testimonial in Positive Psychology and the Body by Kate Hefferon. It was another one of those title/sub-title combos that just jumped out at me.

Of course, the title is a play on Nietzsche’s famous dictum: “What doesn’t kill me makes me stronger.” While the sub-title perfectly captures the focus of the book: “The New Psychology of Posttraumatic Growth.”

Stephen is one of the world’s leading researchers on the science of posttraumatic growth. He is also a professor and therapist.

He started his career studying posttraumatic stress. In the process, he saw that many people experienced significant growth as a result of the stress they endured. At which point, he started developing his ideas on posttraumatic growth. Fast-forward a few decades and here we are.

btw: Martin Seligman followed a similar track. He started out studying learned helplessness, discovered that some people, no matter how much stress they endured, maintained optimism and then shifted his research to Learned Optimism to figure out what made THOSE people tick.

Today we’re going to take a super-quick look at the science of posttraumatic growth.

Stephen tells us: “Many survivors of trauma have experiences that haunt them for the rest of their lives, experiences they can never forget. They may struggle for many years with considerable psychological pain. The new psychology of posttraumatic growth does not deny this fact but, rather, simply recognizes that there is another side to the coin—that in the midst of great psychological pain there can also be a new recognition of one’s personal qualities and a deeper and more satisfying connection to others.

Three existential themes are at the core of posttraumatic growth. The first is the recognition that life is uncertain and that things change. This amounts to a tolerance of uncertainty that, in turn, reflects the ability to embrace it as a fundamental tenet of human existence. The second is psychological mindfulness, which reflects self-awareness and an understanding of how one’s thoughts, emotions, and behaviors are related to each other as well as a flexible attitude toward personal change. The third is acknowledgment of personal agency, which entails a sense of responsibility for the choices one makes in life and an awareness that choices have consequences.”

Very importantly, it doesn’t deny the fact that trauma can create considerable psychological stress and pain.

Stephen tells us that the stress is like an “engine” for growth. The challenge is to make sure the engine doesn’t overheat.

As he says, “But the diagnosis of PTSD does not describe a lifelong condition. It describes a set of problems that a person experiences at a specific point in his or her life—one that, when understood properly, can be the engine of posttraumatic growth. But this ‘engine’ can overheat. And, when it does, we need to stop and check the radiator, thermostat, pump, and antifreeze. The point I’m making metaphorically here is that, when confronted by adversity, we need to actively search for new emotion-regulation and self-soothing strategies so as to get ourselves running smoothly again.”

Like so many other things we’ve discussed, stress following trauma tends to follow an inverted U. Too little stress and there isn’t much growth. Too MUCH stress and we run the risk of posttraumatic stress disorder rather than posttraumatic growth. It’s right in the middle of that inverted U where we find the optimal level of stress that leads to growth.

Helping us understand this point theoretically and then implement the wisdom practically is, of course, what the book is all about.

Let’s take a quick look at the three existential themes at the core of posttraumatic growth.

First, we need to be willing to embrace the uncertainty that is inherently part of life. We run the risk of being unnecessarily fragile if we don’t allow room for the inevitable (!) obstacles and challenges and even traumas to be a part of a deeply meaningful life.

As Abraham Maslow once said about the self-actualizers he studied: “the most important learning experiences . . . were tragedies, deaths, and trauma . . . which forced change in the life-outlook of the person and consequently in everything they did.”

Of course, that doesn’t mean that we are expected to enjoy those tragedies per se. But, when we allow for the presence of these tough times, we are more likely to find that optimal growth point.

Second, we need to practice psychological mindfulness. We want to cultivate self-awareness and notice of how our thoughts, emotions and behaviors are related to each other while we cultivate a flexible attitude toward change.

And, third, we need a sense of “agency”—a belief that we have what it takes to meet those inevitable challenges life throws our way.

One of my favorite books on the subject is called The Power of Agency. In our Notes we reflect on wisdom from Paul Napper and Anthony Rao who tell us: “When we set out to write this book, we were struck by one thing above all. We observed the link between people’s general confidence and their ability to meet significant challenges. It seemed that those who were confident more of the time–that is, they were feeling more in charge of their lives and connected to their sense of agency–reported less anxiety and overwhelm, even when they were placed under highly challenging pressure situations.

For us, this was a eureka moment. It wasn’t just that less anxious people felt more confident but that confidence itself fended off anxiety and moments of overwhelm.

The breakthrough idea we had is this: instead of trying to lower people’s worry or anxiousness (as many practitioners now do with pills and therapies), we attack it from the other end. We encourage a confidence that can actually help keep stress away. And we do it by figuring out what empowers people, what gives people greater capacity to cope and adapt, and nurturing that. Our theory was that the resulting confidence would neutralize–or at least keep at bay–the negative emotions that so often drag people down.”

Here’s to practicing our tolerance of uncertainty, psychological mindfulness and sense of agency with the little things TODAY so we can more powerfully use stress as fuel for our growth for the rest of our lives.