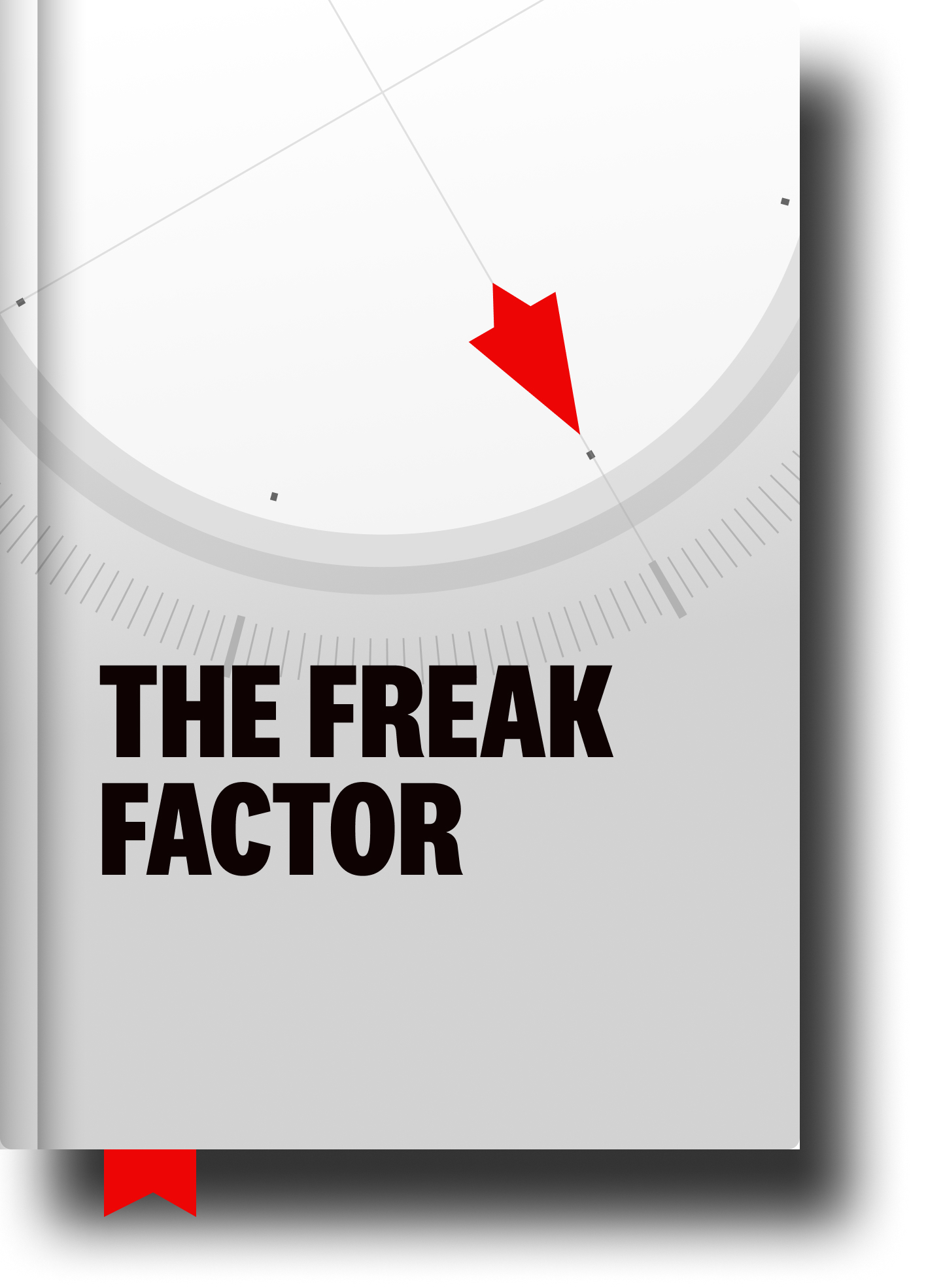 Not too long we spent some time with Dav!d Rendall and his fun book called The Freak Factor.

Recall: Dav!d is so freaky he spells his first name with an exclamation point rather than an “i.” (< HAH!)

Today I want to revisit his freaky brain. In addition to having a PhD, Dav!d is also a comedian. In his book, he tells the story about another comedian you might have heard of before: Jimmy Kimmel.

Here’s the story: “Jimmy Kimmel is a comedian and the host of the late-night talk show Jimmy Kimmel Live! Because of his success, he was asked to host the White House Correspondent’s Dinner. At one point during the event, Kimmel walked up to the podium and said, ‘I also want to thank Mr. Mills, my high school history teacher, who told me that I’d never amount to anything if I didn’t stop screwing around in class. Mr. Mills, I’m about to high-five the president of the United States of America.’ Then he stepped over and high-fived Barack Obama. When Kimmel came back to the podium, he said, ‘Eat it, Mr. Mills.’

Dav!d continues by saying: “I’m not going to criticize Mr. Mills. He believed, as many people do, that school success is essential for success in life. He was trying to give Kimmel helpful advice.

But let’s look at how Kimmel actually succeeded: He didn’t stop screwing around. He went pro. He got sillier, more ridiculous, more childish, and more immature. He started screwing around for a living. He went further in the direction that Mr. Mills told him not to go. Kimmel amplified his weakness, and that is when he found success.”

That’s from the fourth principle of The Freak Factor called “Amplification.”

As in, “Amplification is the essence of flaunting your weaknesses. According to Encarta Dictionary, flaunt means ‘to parade yourself without shame. Show something off—to display something ostentatiously.’ This is a great description. Too often, we are uncomfortable with our weaknesses. We are ashamed of them, apologize for them, and try to hide them. My goal in this book isn’t simply to help you become comfortable with your weaknesses. I want you to parade them without shame. I want you to show them off.”

Dav!d tells us that he “didn’t stop screwing around. He went pro.” He leaned in to his “weakness.” But, to be clear, he didn’t do it in a kinda-sorta, “Meh!” amateur- hour way. He went ALL IN. He TURNED PRO.

And, if you’ve been following along, I know you know what that makes me think of: Stephen Pressfield and his classics including Turning Pro. What’s Mr. Pressfield have to say?

He tells us: “The thesis of this book is that what ails you and me has nothing to do with being sick or being wrong. What ails us is that we are living our lives as amateurs. The solution, this book suggests, is that we turn pro. Turning pro is free, but it’s not easy. You don’t need to take a course or buy a product. All you have to do is change your mind. Turning pro is free, but not without cost. When we turn pro, we give up a life with which we may have become extremely comfortable. We give up a self that we have come to identify with and to call our own…

Turning pro is not for everyone. We have to be a little crazy to do it, or even to want to. In many ways the passage chooses us; we don’t choose it. We simply have no alternative. What we get when we turn pro is, we find our power. We find our will and our voice and we find our self-respect. We become who we always were but had, until then, been afraid to embrace and to live out. Do you remember where you were on 9/11? You’ll remember where you were when you turn pro.”

Of course, in this case, we’re talking about leaning in to our weaknesses and FLAUNTING them as a core part of our “turning pro” strategy.

So, I’ve alchemized that weakness into the core of my work—focusing on the Energetic fundamentals that keep us plugged in so we can shine. I’m also super-sensitive to all kinds of food, too many tech inputs and, if I get one bad night of sleep, I tend to look like I raged in Vegas for a weekend. (lol) Whatever. It is what it is. I’ve TURNED PRO and made going to bed early and doing everything else I do to Optimize a sport.

What are some of YOUR weaknesses and how can you turn them into a core part of who you unapologetically are?

P.S Dav!d shares this quote from Francois de La Rouchefoucauld at the start of this chapter: “We are so accustomed to disguise ourselves to others, that, in the end we become disguised to ourselves.”

👆 Let’s not do that. Much better to own our freakiness and wave that flag with pride!