Brian here with a quick note. 👋

People are always asking me what I do to keep myself Heroically Energized.

Other people are often asking us if they can sponsor our newsletter, etc.

We’ve met a LOT of you through our sponsorships of newsletters by some of my friends and favorite people including Cal Newport, Ryan Holiday, Hal Elrod, Todd Herman, and Spartan to name a few.

We’re excited to do a little matchmaking and introduce you to some Heroic companies who share our mission to help us show up as our best, most Heroic selves who we think you might like to meet!!

We’re going to start with some of the companies Alexandra and I know and love.

We’d love to know what companies YOU know and love that you think would be a great fit for our community!!!

Share them here (pretty please and thank you!): https://heroicpbc.typeform.com/sponsor-ideas

Do YOU run a company that you think would be a great fit?

We have a limited number of available slots through the end of the year/Q1 and we’re super excited to share more soon!!

Bonus: We’ll have some of our favorite companies and their products at the event in December as well!!

P.S. When I googled “matchmaking” to confirm how to spell it (without a space between the words!), I found some DATING matchmaking services.

Which made me think of how many friends/people in our community (it’s a LOT!) have asked us to create a way to connect Heroic community members to one another as it’s so hard to find people to date with values as aligned as people within our community’s values are.

Fun fact: Alexandra and I met after a friend of hers found the social platform called Zaadz I built 15+ years ago. He thought she’d love it and told her to join.

She joined, looked up who the CEO of the company was (me!), thought I looked pretty cool (thanks, babes!) and said to herself, “I’m going to marry him.”

Got misty typing that.

Then she moved from Illinois to Los Angeles LESS THAN HALF A MILE from my house in Santa Monica.

Then she produced an eco-biz event at UCLA. They needed sponsors. She said they should reach out to my company because a) we’d be a good sponsor and b) she was going to marry the CEO.

To which her biz partner said, “I know Brian. I’ll call him right now.”

I get his text and hand him off to my biz dev lead who instant messages me a few minutes later and tells me she found a woman who wants to marry me.

To which I say: “That’s super weird. I have ‘start dating again’ in my blackberry for THIS WEEK!” (As I had ended a relationship a few months before.)

Then my biz dev lead told me I HAD to IMMEDIATELY call this woman. So I did.

We went on our first date that weekend.

The rest is history.

Yah. We’re planning to launch Heroic Social in Q1. And we DEFINITELY plan to help connect our Heroic members to one another and see if we can create some Heroic relationships and Heroic families in the years and decades ahead. 🤓

btw: Here’s a preview of what our social platform will look like.

We designed it with MetaLab — the same company that helped build Slack and Tinder and Uber Eats and Elon Musk’s biz Neuralink. 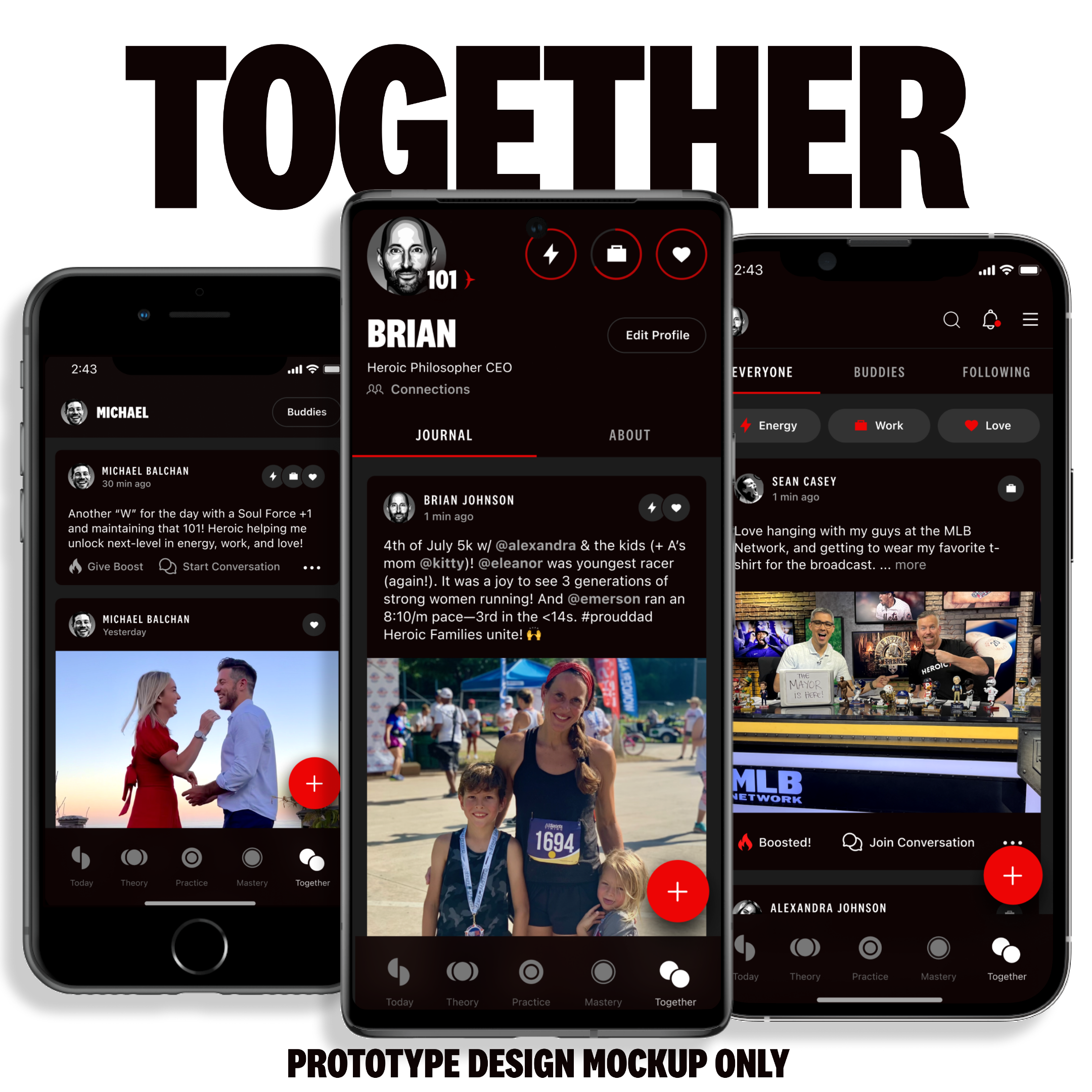 btw: Have you seen Love 101 yet? It’s a class Alexandra and I taught together. You might dig it!